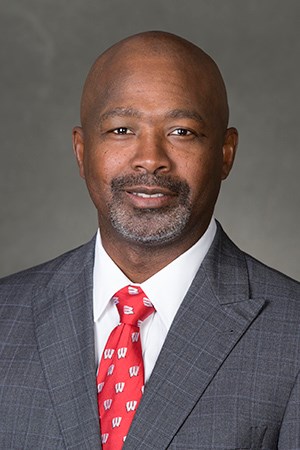 Ted Gilmore is in his fifth season as wide receivers coach at Wisconsin in 2019, his third year with the title of Offensive Pass Game Coordinator.

A veteran of the college and NFL coaching ranks, Gilmore’s experience has been evident in his work building one of the Badgers’ most promising position groups. His efforts have helped Wisconsin post a 42-12 record over his first four seasons in Madison, a run that includes wins in the Holiday, Cotton, Orange and Pinstripe bowls to go along with a pair of Big Ten West Division championships.

Under Gilmore’s tutelage, A.J. Taylor recorded 1,049 receiving yards and averaged 16 yards per catch during his first three seasons of action, while Danny Davis scored 10 touchdowns across his first two years.

In 2017, Gilmore oversaw the development of four receivers who emerged as consistent threats for Wisconsin’s passing attack. Sophomores Quintez Cephus and Taylor were joined in the receiver rotation by freshmen Davis and Pryor to give the Badgers an impressive quartet on the outside.

Their impact was on display as the Badgers wrapped up a program-best 13-1 season with a 34-24 win over Miami in the Capital One Orange Bowl. Davis concluded his true freshman campaign by catching a UW bowl game-record three touchdown passes, while Taylor logged eight receptions for a career-high 105 yards and a TD.

Cephus led the Badgers with six touchdown grabs and averaged a team-best 16.7 yards per reception, earning All-Big Ten honorable mention despite being sidelined by injury for the season’s final five games. Davis and Taylor pulled in five touchdown catches apiece, and both averaged better than 15 yards per reception.

In his first season at UW, Gilmore mentored senior WR Alex Erickson to first-team All-Big Ten honors for a season in which he caught 77 passes for 978 yards. Gilmore also guided the emergence of receivers Rob Wheelwright and Jazz Peavy.
Peavy went on to earn honorable mention All-Big Ten laurels as a junior in 2016, leading the Badgers with 635 receiving yards and five touchdown catches. Wheelwright enjoyed a strong senior campaign, logging 448 receiving yards and a touchdown, before being selected for the 2017 NFLPA Collegiate Bowl and earning a free agent deal with the New York Giants.
Gilmore came to Madison after spending the previous three seasons coaching wide receivers for the Oakland Raiders.
Before moving to the NFL, Gilmore spent 18 years in the college ranks. He coached at USC in 2011 and was named FootballScoop Wide Receivers Coach of the Year for helping to mold one of the top receiving corps in the country, led by 2011 Biletnikoff Award finalist and consensus All-American Robert Woods and 2011 Freshman All-American Marqise Lee. Both went on to be selected in the NFL draft.

Prior to that, Gilmore spent six seasons as the wide receivers coach at Nebraska, adding the title of assistant head coach in his final three seasons while also serving as the Huskers’ recruiting coordinator.

Gilmore also coached wide receivers at Colorado (2003-04), Purdue (2001-02) and Houston (2000). He was the tight ends coach at Kansas in 1999 and coached wide receivers at his alma mater, Wyoming, the previous two seasons.
In 2003, while at Colorado, Gilmore coached D.J. Hackett, who set the Buffaloes’ single-season receptions record (78), earned first-team All-Big 12 honors and was drafted in the fifth round by the NFL’s Seattle Seahawks.

At Purdue, Gilmore mentored future NFL players Taylor Stubblefield and John Standeford. Stubblefield went on to become a consensus All-American and Biletnikoff Award finalist in 2004 while setting the NCAA career receptions record with 316.
A native of Wichita, Kansas, Gilmore entered the coaching ranks as a graduate assistant at his alma mater, Wyoming, under head coach Joe Tiller from 1994-96. During that time, Marcus Harris, the 1996 Biletnikoff Award winner who was a two-time first-team All-American (1995-96) and three-time All-Western Athletic Conference first teamer, set NCAA records for most career receiving yards (4,518 yards) and consecutive seasons with 1,400 receiving yards (3) and twice led the nation (1994 and 1996) in receiving yards per game before being chosen in the seventh round by the Detroit Lions.

After beginning his playing career by spending two years as a receiver at Butler Community College, Gilmore lettered at Wyoming from 1988-89. He caught 40 passes for a team-best 594 yards and three touchdowns as a junior to help the Cowboys to the 1988 Holiday Bowl and he added 32 receptions for 445 yards and two TDs as a senior to earn All-WAC second team honors.

He earned his bachelor’s degree in sociology from Wyoming in 1991.