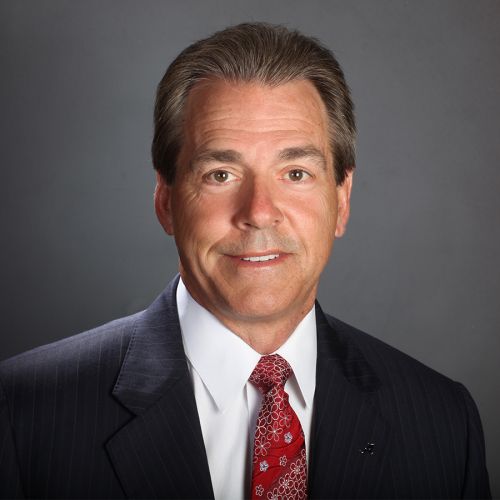 In his 14th season in Tuscaloosa, Saban’s uncompromising dedication to excellence in every phase of the program has resulted in five national championships since 2009. An eight-time National Coach of the Year, Saban has achieved resounding success as a head coach and has earned a reputation as an outstanding tactician, leader, organizer and motivator. Those qualities have sparked impressive turnarounds at every stop of his career. Saban’s consistent approach and disciplined leadership are the reasons his teams are known for exhibiting grit, determination and resilience, often overcoming adversity to achieve victory.

Saban, who was named the SEC Coach of the Year and Munger Award National Coach of the Year (presented by the Maxwell Football Club), had five players earn first team All-America honors – Jonathan Allen, Minkah Fitzpatrick, Reuben Foster, Marlon Humphrey and Cam Robinson. Allen also captured the Nagurski Trophy and the Bednarik Award, both of which go to the national defensive player of the year, and the Hendricks Award as the nation’s top defensive end, while Foster won the Butkus Award that is given to the nation’s best linebacker, and Robinson captured the Outland Trophy.

Before arriving in Tuscaloosa, Saban’s most recent college head coaching stint was a five-season run at LSU that produced a record of 48-16 (.750), one national championship (2003), two Southeastern Conference championships, three SEC Western Division championships, and a 3-2 record in bowl games with two Sugar Bowl victories and a Peach Bowl win. LSU constructed a 28-12 (.700) record against SEC opponents under Saban’s guidance. He was named the 2003 National Coach of the Year by the Associated Press and earned both the Paul W. “Bear” Bryant National Coach of the Year Award and the Eddie Robinson Coach of the Year Award by the Football Writers Association of America. Saban was named SEC Coach of the Year twice (by The Birmingham News in 2001 and by the Associated Press in 2003) while at LSU.

Saban took over the Alabama program after serving two seasons at the helm of the Miami Dolphins. Saban’s teams showed marked improvement over the unit he inherited. Taking over a team that finished 4-12 in 2004, Saban led the 2005 Dolphins to a 9-7 record, the third-biggest turnaround in the NFL that season and the second-highest victory turnaround for a Dolphins team in any non-strike season. Most impressively, the Dolphins finished 2005 on a six-game winning streak to end the year, the longest streak in the NFL that season.

As a member of the Cleveland Browns defensive staff under Bill Belichick, Saban is a notable part of the Belichick coaching tree. Over the years, however, Saban has built an impressive coaching tree of his own that included many prominent NFL and college head coaches and assistants.