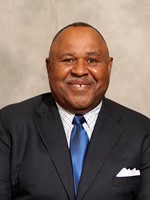 Oliver “Buddy” Pough is in his 15th season as head football coach at South Carolina State, his alma mater. During a 14-year tenure at the school where he earned a bachelor’s and a master’s, as well as All-MEAC honors as an offensive lineman, Pough has compiled an overall record of 112-51 and an 87-24 MEAC worksheet. His teams have also captured two MEAC titles (2008 & 2009) outright, shared four others, and made four trips to the prestigious FCS playoffs.

In 2009, SC State was named National Black Champion. In addition, the Bulldogs finished number seven in all three major FCS polls – The Sports Network, the FCS Coaches Poll and Any Given Saturday.

Pough’s 2009 squad finished 10-3 overall, captured its second consecutive MEAC crown with an unblemished 8-0 record and made back-to-back appearances in the FCS playoffs. The Orangeburg native reaped Coach of the Year honors in the MEAC — his second in as many seasons.

Prior to taking the reins at South Carolina State, Pough spent five seasons as an assistant at the University Of South Carolina (USC). During his stint at USC, he helped build the Gamecocks into one of the top offensive teams in the SEC.  USC made back-to-back appearances in the Outback Bowl in 2000 and 2001. Before going to USC, Pough was one of the top high school coaches in the Palmetto State, leading Fairfield-Central to a perfect 15-0 record in 1996 and claiming the Class AAA state title. He earned South Carolina High School League (SCHSL) Coach-of-the-Year honors for his efforts, the first of such three honors.

In his final two seasons (1973 and 1974) as a player for SC State, the Orangeburg native and former offensive lineman helped the Bulldogs to a 15-7-1 record, a league crown and back-to-back postseason appearances seasons.

Pough and his wife, Josie are the parents of two sons–Oliver “Bud” IV and Lee Judson and a daughter-in-law, Dr. Natalie Odom Pough. Pough has one granddaughter Taylor Michelle