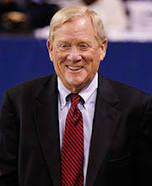 Bill Polian spent 32 seasons in the National Football League during which time he earned the reputation of rebuilding franchises into dominant playoff teams. He is most noted for turning the fortunes of three different teams that included a combined five Super Bowl appearances by the Buffalo Bills and Indianapolis Colts.

Polian, who began in the NFL as a scout for the Kansas City Chiefs from (1978-1982), took over as the general manager of the Bills in 1984. He built Buffalo into a powerhouse and led the team to four straight AFC Eastern Division titles from 1988 to 1991 including back-to-back 13-3 records in 1990 and 1991. The Bills also earned three straight Super Bowl berths after winning the AFC championship in 1990-92.

He worked in the NFL office in 1993 and 1994 as the league’s Vice President of Football Development before taking on general manager duties of the expansion Carolina Panthers. Under his leadership, Carolina advanced to the NFC championship in just his second season. The ’96 Panthers won the NFC Western Division with a 12-4 mark and knocked off the Dallas Cowboys in the NFC Divisional Playoff Game before falling to the Packers in the NFC championship.

In 1998, Polian moved on to the Indianapolis Colts where he served as President/General Manager through 2011. During his tenure, the Colts experienced great success that included eight division crowns and two Super Bowl appearance highlighted by a victory in Super Bowl XLI. With Polian at the helm, the Colts advanced to the postseason 11 times during a 12-season span and posted 10 or wins in each of those playoff years.

Not counting start-up seasons and his final year, Polian’s teams combined for a .625 regular season winning percentage. In all, Polian led the Bills to the AFC championship four times, the Panthers once, and the Colts three times.

In 2009, he became the only administrator ever to be named the NFL’s Executive of the Year by The Sporting News six times.