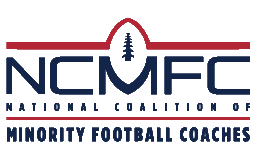 FULTON, MD – The National Coalition of Minority Football Coaches (NCMFC) proudly announces
the creation of the “Coalition Academy” – a first of its kind mentorship program pairing influential
athletic directors with minority football coaches. The Coalition Academy will further the NCMFC’s
mission of preparing, promoting, and producing minority coaches at all levels of competition given
the well-documented inequities minority coaches experience. In other words, the NCMFC wants
the best candidates selected regardless of color, race, or sexuality.

Spearheaded by NCMFC Board Member Desiree Reed-Francois, and supported by Founder Michael
Locksley, this unique and purposeful year-long program ties together mentorship, networking, and
leadership training to help prepare the next generation of minority head coaches.

“As part of our efforts to provide comprehensive educational opportunities and networking to
minority coaches, the Academy allows our participants to build upon their on-field experiences
with the off-field information necessary as they advance,” Reed-Francois said. “In the end, as in
many professions, relationships and advocacy matter. The Academy will hopefully foster lifelong
relationships between coaches and decision-makers. The Academy will provide minority coaches
with one more tool in their belt as they seek to advance their careers and we are grateful to the
mentors and to the coaches for their willingness to move college athletics forward.”

The NCMFC views mentorship and networking as an undervalued aspect of searching and
securing a leadership position in the industry of football. The guidance these coaches will
receive from an experienced athletic director is invaluable.

The Coalition Academy has brought together over a century worth of knowledge about the
hiring process at the highest levels of college football. The Academy will not focus on the Xs and
Os of the game; rather, it will focus on the Xs and Os of hiring. It will equip already capable
coaches with the insight and intangible skill sets necessary for leading a football program. To
this end, one difference in separating a successful head-coaching candidate from the other
candidates is leadership. The Academy will provide training in areas that will help coaches
advance their leadership skills, ranging from interview preparation, to media engagement, to
culture creation. And before the start of the next hiring cycle, all Academy candidates will
participate in mock interviews conducted with the participating athletic directors.

Coaches are no longer selected, they are elected. In today’s game, potential coaching
candidates are rarely identified to fill vacancies through a rigorous weeks-long or months-long
vetting process. Media messaging, public perception, and the “hype” or “aura” surrounding a
coaching candidate dictates their potential for securing an interview. The Coalition Academy
will prepare and promote minority coaches in manner that will include these coaches in the
hiring conversation through a high-powered networking group. As the next hiring cycle begins,
the Coalition Academy will set metrics and track progress not only to analyze the hiring
landscape, but also to improve on the program for future participants. Ultimately, this program
will provide a unique platform for participating coaches to expand their reach, connections, and
visibility – all ultimately in the pursuit of leading a football program and molding the next
generation of student-athletes.

About the National Coalition of Minority Football Coaches
Despite the vast number of minority football players at all levels, minorities are excluded from
or limited in leadership opportunities at most levels disproportionately. The reason for their
exclusion is inextricably intertwined with societal roadblocks that underrepresented individuals
frequently face. These roadblocks create an unfortunate imbalance where minorities do not
enjoy meaningful participation in available coaching opportunities to the same degree as their
counterparts.

Established in June 2020, The National Coalition of Minority Football Coaches (NCMFC) and its
foundation are dedicated to preparing, promoting, and producing minority football coaches and
administrators at all levels of football. Amid a global pandemic and a renewed focus on equity,
there is now a significant movement in football led by some of the most prominent football
coaches and executives through the NCMFC.
For more information about the National Coalition of Minority Football Coaches, please visit: www.ncmfc.com